Poetry in ACTION in Canberra 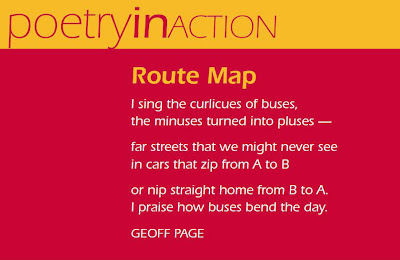 The poems are on display inside around 100 buses on Canberra's busiest routes.

Bus journeys around Canberra will be little more literary than usual over the next few months.

The ACT Government hopes to instil in commuters an appreciation for poetry, decorating inside ACTION buses with musings on subjects as diverse as disapproval, possums, and the pluses of buses themselves.

It is the fourth year of Poetry in ACTION in the ACT, with six poems by four local poets chosen to grace the walls of around 100 buses on Canberra's busiest routes.

Some poems reference Canberra, extolling the National Library and Commonwealth Bridge, while others deal with more universal themes like aging and separation.

The idea originated in London nearly 25 years ago with Poems on the Underground, and has since spread to Dublin, New York, Paris, Stuttgart, Barcelona, Athens, Moscow, St Petersburg and Shanghai, as well as Adelaide, Melbourne and Sydney.

"I think poetry as an art-form is not perhaps as appreciated as it once was," he said.

But he says the bus-riding community has responded well to the poems.

"I've always been surprised in terms of my role as Minister of the Arts, [at] the number of poets in the ACT and the very high level of interest and support for poetry in the ACT," he said.

"At a community level that's reflected through the very strong feedback we get from patrons of ACTION buses to the poems."

Long-listed poets from the ACT Poetry Prize's David Campbell Award were commissioned to write short poems specifically for display in the Territory's buses.

The final six chosen were written by Danijela Kambaskovic-Sawers, Moya Pacey, Geoff Page and Maggie Shapley.
Posted by Andrew Burke at 8:02 am

What a great idea. I love the poem you posted, too. The last line is perfect.