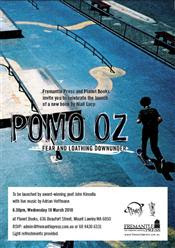 In Pomo Oz, Niall Lucy pits his humour and intellect against the conservative power brokers, championing the notion that free thought, not free trade, is the basis of democracy.

Lucy is one of Australia’s leading thinkers on Derrida & postmodernism, so if you’re sick of hearing people bang on about the evils of the postmodern (when they obviously have no idea what they're going on about) come along!

Or if you think postmodernism is less a philosophy than an excuse for a bit of moral relativism? Come along too.


Launched by John Kinsella
at Planet Books
on Wednesday 10th March 6.30pm
rsvp to admin@fremantlepress.com.au
(or just drop by, we’ll squeeze you in)
Posted by Andrew Burke at 12:23 pm